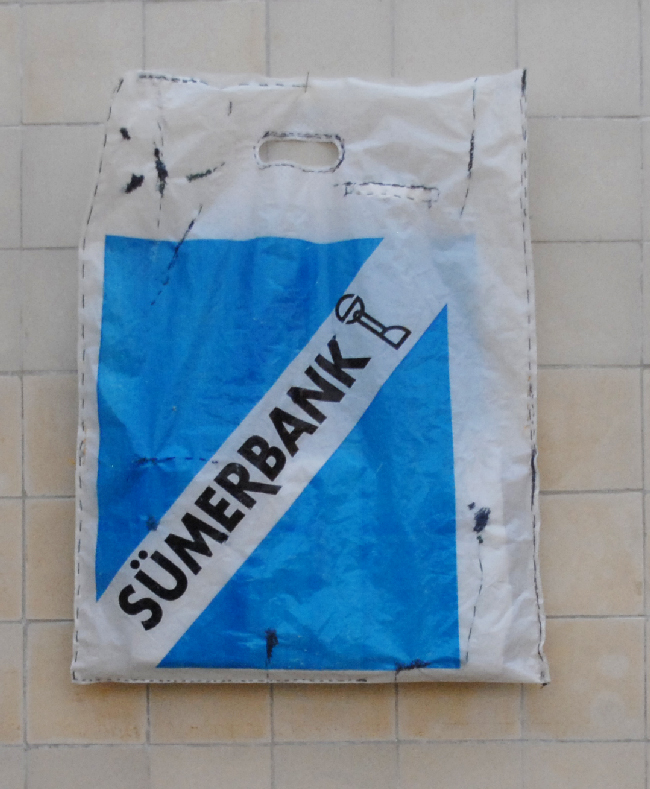 
Sumerbank (2012) features an original Sümerbank* store bag which is made of old plastic that can’t dissolve by itself in the nature and is dated 1986. The artist have been using this bag for a long time as a handbag and each time it got damaged she stitched the damaged parts. The work is rather performative in this sense and the result of this performance is displayed in the exhibition space. By constantly repairing it, Deniz treated the plastic bag as a valuable thing. On the bag, Sumerbank’s advertisement reads: “If your income is low, buy cheap but high-quality products from our store.” For Deniz, this creates a contrast to the illusion of wealth fostered by the advertisements of companies such as H&M which frequently feature popular figures like Madonna.


* Sumerbank began as a textile plant. In 1932, the Turkish government put together a first first-year economic plan. Then Prime Minister Ismet Inonu secured a credit from the Soviet Union for the construction of the Sumerbank plant in Kayseri. The factory opened in September 1935. Designed, financed and equipped with machinery by the Soviet Union, it was a direct replica of similar Soviet cotton plants. When it was built, Sumerbank's textile plant produced most qualified and relatively cheap textile products of that time. As a representative of social state policy, that prior policy was the public benefit, hovewer in late 80's it become subject to the privatization. The half a century of state-led industrialization represented by Sumerbank and its subsidiaries were closed and became a historical milestone in 2002.